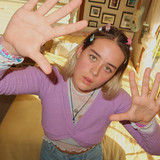 Lili Crane is a singer/songwriter from Newcastle, Australia. Developing her love for music at an early age; she began playing the guitar and wrote her first song at nine years old. At age 15, Crane won Rural Aid Australia’s Rising Star competition; which saw the young songwriter travel to Nashville to work with Grammy-nominated producer Shane Adams. In 2019, Lili Crane released her debut single Don’t Take My Mask Off. A song which pairs her Americana roots with a new Indie Rock sound; influenced by acts such as Beabadoobee, The Band Camino, and Soccer Mommy. After selling out her first headline show, Crane set to work on her Debut EP. Recorded by Gareth Hudson at Hazy Cosmic Jive Studios; In My Head was released in February 2020 - with closing track ‘The Detour’ appearing on triple j’s 'Roots & All' and 'Home & Hosed' programs. Crunchy rock guitar tones contrasted with glittery pop sounds compliment Crane's catchy lyrical hooks in her songs. A huge sound coming from an upcoming artist. Crane has had the opportunity to open for many artists over the years, including more recently; Nathan Cavaleri, Hope D, Little Quirks and Ben Stewart (Slowly Slowly) as well as selling out her own headline band shows including her most recent launch for her single, 'Gemini' on the 19th of March.