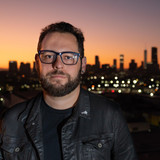 Nick Norton is the artistic director of Equal Sound. He plays in the bands The Newports and Honest Iago and makes something between post rock and ambient electronica under the moniker Calm Machine. Orchestras, chamber ensembles, and soloists have commissioned and performed his compositions worldwide.After falling in love with the art of live performance while watching from the wings of the Hollywood Bowl as his godfather Russell Ferrante's band Yellowjackets just utterly lit the place up, Nick took up guitar, saxophone, and singing in school choirs. The second Iraq war and falling in love with bands like Refused, Bad Religion, Strung Out, and NOFX politicized him into attending UC San Diego, L'ecole Normale de Musique de Paris, King's College London, and UC Santa Barbara to study music composition and political philosophy. His doctoral dissertation, titled Concert Production as Composition, is slated for publication this summer. Nick came of age dividing his time between LA film sets, Ventura County beaches, and the far west end of Catalina Island. One time he and three friends

kayaked from the island to San Pedro to see Rage Against The Machine and Wu-Tang Clan. He also had a signed photo of Jimmy Buffett above his bed at Emerald Bay, and maybe that's actually all you needed to know.