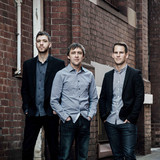 Drawing inspiration from the sensibilities of pop lyricism and melody, Chris Broomhead’s trio project Refraction melds the various colours of contemporary jazz composition and improvisation together into a compelling musical soundscape. Refraction celebrates the sanctity of simplicity, upholding the primacy of a song’s melody whilst leaving space for collective ensemble interaction and improvisation. The trio has played together extensively over the past number of years, performing at Bennetts Lane Jazz Club, Uptown Jazz Cafe, Jazz Lab, Paris Cat Jazz Club and Dizzy’s Jazz Club, presenting a collaborative work combining visual projections with musical performance at Kew Court House, performing at the Melbourne Recital Centre, and performing as part of the Melbourne Improvisers Collective, Melbourne Jazz Collective, Leaps and Bounds Festival and White Night Festival. They released their debut album As We Were in March 2015 and it was nominated for Best Jazz Album in The Age Music Victoria Awards of that year. Their follow-up recording entitled Inerrant Space was released in May of 2016 and their third album Reimagined was released in June 2017. Their fourth studio recording The Outsider was released in June this year. The trio is Chris Broomhead on drums, Brenton Foster on piano and Jordan Tarento on double bass. You can find more information at www.chrisbroomhead.com.