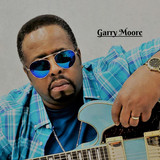 Garry Moore has a long musical history. A singer, songwriter, musician, and producer. He wrote his first song at age 12 and now has a catalog of over 700 songs. He began his musical journey at age 9 when his grandmother formed a gospel quintet of 3 cousins, a friend, and himself. Influenced by the Beatles, he picked up the guitar at age 9. His father also played which inspired him as well. He sharpened his guitar skills listening to Carlos Santana, Jimi Hendrix,

Al Mckay, and other guitar greats. His influences as a teenager were Andrae Crouch, The Mighty Clouds Of Joy, Rance Allen, Edwin Hawkins, Earth Wind & Fire, and The Commodores.