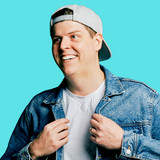 “The dance and pop worlds collide in irresistible fashion, with Teddy Beats showing off the producing skills that are quickly making him a household name. This much seems to be certain: there doesn’t seem to be any genre of music that Teddy Beats can’t make." -EDM Tunes Teddy Beats is pioneering the chill dance genre: too pop for EDM and too EDM for pop. Accumulating over 12 million streams on Spotify, Teddy Beats frequents Spotify editorials (Chill Tracks, Electro Chill) and radio. Teddy’s songs have charted internationally and are currently in rotation on Virgin Radio and Sirius XM Chill. He’s also been a guest DJ on their “House of Chill” program. He’s released on numerous big labels including Armada, Soave, Smash the House, and Knightvision/Warner. Teddy has taken his talents to clubs from coast to coast in the United States and played at some of the country’s biggest music festivals, including Moonrise and Firefly. Born and raised in the DC suburbs, Teddy Beats has been around music for most of his life. After graduating from college, Teddy trained to be a certified audio engineer at Omega Recording Studios. Teddy’s first experience with music production was creating hip-hop beats where he was signed to a production deal with Bad Boy Entertainment “Hitmen” producer Chucky Thompson (Biggie, Nas, Mary J. Blige). He later transitioned into dance music, with his first dance song landing on Sirius XM Chill.