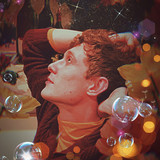 As the main creative force behind Book of Colors, André Paraguassu has already had a fruitful artistic career, but he assures me that he’s just getting started. In 2016, Deer Bear Wolf Records released Book of Colors' self-titled debut; a sprawling psychedelic chamber pop album that announced the arrival of a unique and powerful voice. With a deep baritone that stretches up into soaring high notes, Paraguassu has often heard comparisons to both Nick Drake and Jeff Buckley, but the feedback he gets most often (and that I agree with) is that his voice doesn’t sound like anybody else’s—and neither does his songwriting. Last year saw two new singles from Paraguassu; a haunting solo release called Speak With Your Heart, and a Book of Colors track called “Falling, Falling.” Paraguassu’s latest release (arriving July 27th)

consists of two songs; the first one is called “if the day comes,” which begins with a flourish of loud guitars, bombastic drums, percussive organ notes, and lilting vocal harmonies. The celebratory mood and catchiness of the melody is apparent within the first five seconds, but after the intro it quickly settles into something much more emotionally visceral and complex. The B-side is a cover of a Billie Eilish song called "everything i wanted." I can’t help but feel like this pairing is the perfect exemplification of Paraguassu’s ability to exist in multiple worlds simultaneously, like a yin-yang of emotion, intensity, and influence.