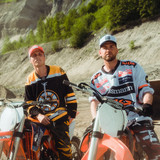 Few could have foreseen the rapid rise of Mikkel Christiansen and Simen Auke aka Broiler when they entered the music scene in 2011. In only a few years time, and over 450 million Spotify streams later, the boys have transformed themselves from minor YouTube personalities into a well established and highly successful DJ/producer duo.

Originating from humble beginnings in the sleepy town of Drammen, Norway, the boy’s began to hone their production skills in 2011, experimenting with different styles and textures before landing on their unmistakable signature sound a few years later. A delicate blend of future and melodic house, Broiler began to incorporate this distinctive sound into their remixes of artists such as Syn Cole, Maroon 5, and Cazzette with devastating effect.