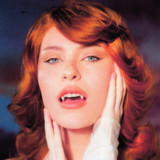 Born from the beautifully strange imagination of a wide-eyed misfit raised in the Dallas outskirts, Allison Ponthier’s songwriting hints at her country roots through her heart-on-sleeve storytelling and crystalline vocal work. Her lyrics whimsically portray the lucid confessions of a shy teen coming to terms with her queer sexuality in a Texas suburb much like football-obsessed town of Friday Night Lights, further heightened to create a world inspired by the Camp warped eccentricities of Henry Selick, Vincent Price, and Elvira. Allison’s music and visuals follow her own self-reflection as she left the Bible Belt for Brooklyn in search of community despite not knowing anyone in New York—an initially disastrous move that ultimately inspired her own breakthrough on both a personal and artistic level. Overwhelmed, friendless, and struggling to keep up with rent, Allison began embracing the calamity of being a self-identified goody-two-shoes Texan living in the epicenter of brazen East Coast hipsterdom. Bringing such a depth of attention to every aspect of her music, Ponthier began building an extravagantly realized version of the world she retreated into as a kid back in Texas: a place where difference is endlessly celebrated.