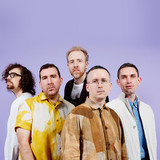 With their witty, affecting songwriting and the immediately recognizable vocals of Alexis Taylor and Joe Goddard, Hot Chip combine indie and dance in innovative ways. On early albums such as 2006's Mercury Prize-nominated The Warning, the band evoked the cleverness of Talking Heads and the poignancy of the Pet Shop Boys. As time went on, Hot Chip's music broadened and deepened, encompassing the tender musings on commitment of 2010's One Life Stand as well as the anything-goes genre mashups of 2015's Why Make Sense? With only a few hit singles to their name (chief among them the Grammy-nominated "Ready for the Floor" from 2008's Made in the Dark), Hot Chip nevertheless earned a following that allowed them to headline festivals, as reflected by the rave-tinged anthems of 2019's A Bath Full of Ecstasy.

Vocalists/multi-instrumentalists Joe Goddard and Alexis Taylor met in 1991, when they both attended Putney's Elliott School. During their time there, they bonded over their love of the Beastie Boys as well as American indie singer/songwriters such as Will Oldham and Bill Callahan. They also began working on their own music, and found a mentor in their schoolmate, Four Tet's Kieran Hebden. Taylor and Goddard continued their collaboration even when they went to different universities in 1999 (Taylor studied English at Cambridge, while Goddard pursued a history degree at Oxford), and added new influences like U.K. garage, pop, and R&B to their tracks. In 2000, Goddard and Taylor officially became Hot Chip. That March, they released the Mexico EP, a hypnotic wash of nearly subliminal, pulse-like techno beats, acoustic guitars, and plinky pianos on Victory Garden Records. After graduating from university, they returned in October 2002 with the Sanfrandisco E-Pee, which dabbled in more playful sounds such as beatboxing. The EP caught the attention of Moshi Moshi Records, which released Hot Chip's first full-length, Coming on Strong, in 2004. The duo became a full-fledged band with the addition of Owen Clarke, Al Doyle, and Felix Martin. Prior to making their second album, Hot Chip signed to EMI Records in the U.K. and DFA Records in the U.S. (the latter issued The Warning in the U.S. in late 2005 as a co-release with Astralwerks). Arriving in May 2006, The Warning fleshed out the band's sound. In addition to reaching number 34 on the U.K. Albums Chart and number 13 on Billboard's Top Electronic Albums chart, it earned critical acclaim that included a Mercury Prize nomination and was eventually certified gold in the U.K. In addition, the singles "Over and Over" and "Boy from School" became Top 40 hits in the band's homeland. Hot Chip followed the album with a DJ-Kicks mix album in 2007. The band returned with February 2008's Made in the Dark, which featured some of their most focused grooves and poppiest melodies to date. The album peaked at number four on the U.K. Albums Chart, and like its predecessor, was certified gold. The single The single "Ready for the Floor" peaked at number six on the U.K. Singles Chart and earned a Grammy Award nomination for Best Dance Recording. At the end of the year, Hot Chip issued Hot Chip with Robert Wyatt and Geese, which featured the band working with the singer/songwriter and the string quartet on a set of reimagined and remixed songs from Made in the Dark. After the Made in the Dark tour ended, Hot Chip began work on their fourth album in early 2009. The band drafted This Heat drummer Charles Hayward, the Invisible's Leo Taylor and Trinidadian steel pan player Fimber Bravo to add different percussion styles to One Life Stand, which arrived in February 2010.