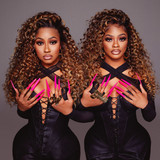 Hailed by Rolling Stone as being “the hottest duo in rap,” the City Girls has successfully claimed their stake as being the most notorious power players in female Hip Hop. Yung Miami (Caresha Romeka Brownlee) and JT (Jatavia Shakara Johnson), known for being authentic, uncensored and unapologetic, took the world by storm with their first two projects Period and Girl Code, followed by their contribution on Drake’s number one pop hit “In My Feelings.” The first ladies of Quality Control Music, Yung Miami and JT’s knack for storytelling mixed with their infectious personalities are responsible for empowering a cult following of women who not only have something to say but aren’t afraid to say it. City Girls’ presence and ascent, as their lyrics suggest, are attributable to their resilience, pride and just a little bit of finesse. From “Take Yo Man,” “Pussy Talk” and their latest single “Twerkulator,” there’s no shortage of bravado, pleasures (both carnal and material), or pursuit of opportunities in their songs, which brim with a buoyant nonchalance, as if begging for someone to challenge them. This ownership over who they are—without shame or pause—that oozes from their music, carrying the proud, sex-positive hustler’s DNA of the Florida rap that preceded them.