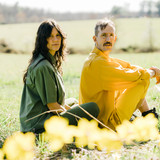 Daniel and Lauren Goans combined their lives when they wed in 2012. They combined their voices and creative habits when they established their distinct sound and formed the band Lowland Hum in 2013. Flash forward eight years and they are making more music than ever, still in their own language of unexampled harmonies and distilled acoustic arrangements. The two lived the intervening years primarily on the highway, performing across the United States & Europe, sharing stages with Josh Ritter, Jesca Hoop, The Oh Hellos and others along the way.

Self-producing six full length albums and four eps, the prolific duo has garnered ongoing critical acclaim for their minimalist brand of indie folk from NPR, the Washington Post, American Songwriter, Paste, Billboard, No Depression, and the Wall Street Journal. As Robin Hilton of All Songs Considered (NPR) put it, “if you love sublimely beautiful two-part harmonies, you’re not going to do better than this band.” In the first few months of 2021, after welcoming their first child into the world, Lowland Hum jumped back into their studio to embark on an ambitious journey reimagining Peter Gabriel's acclaimed album, So, in its entirety. On July 30th, the band announced that their seventh studio album, At Home, will be released October 22. Lowland Hum is looking forward to touring in the fall and continuing to introduce their little one to the ever expanding catalogue of albums that have inspired and kept them going for years.