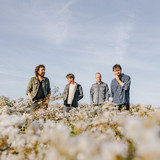 In an isolated part of the Netherlands de Oudebildtdijk in Friesland, you can see the beacon of the lighthouse glide over the land. From here, from the wind, the sea and the clay,

the band Seewolf originates. Seewolf consists of four men who spend time making songs and machinery. You can hear their passion of playing only that which is necessary back in their songs. The songs also tell you that Seewolf takes the time to unravel the stories they want to tell. The musical genre can best be described as Psychedelic Indie Rock.In the 70’s, a certain tape machine was used in the Wally Heider Recording Studio, San Francisco. Artists such as Creedence Clearwater Revival, Neil Young, Van Morrison, Tom Waits en Grateful Dead record on that same tape machine. The four men of Seewolf bought and shipped this tape machine from the