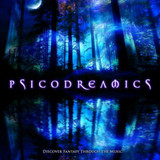 Psicodreamics is the ambient music project that reveals the unique magic, mysterious and idyllic world of musical art of Spanish composer Salva Moreno. A great part of his music world is inspired by mythology and fantasy creating a rich sanctuary of haunting and mysterious fairyworld sound, covering many genres, mainly ambient, new age, goth and chillout. His songs have been featured in many spezialized magazines and relevant long-running radioshows covering new age music like Hearts of Space and Echoes among others. During the years his music has been followed and acclaimed by the especialized media. One example of this is his last album Ancient Wisdom, nominated in the "best new age album" category for the 2011 Independent Music Awards (IMA). His discography is fully available thru the best online retailers and digital stores like CDbaby, iTunes and Amazon among others.