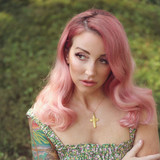 Ashley Monroe has established herself as one of Nashville's finest singer-songwriters, able to conjure emotion in unexpected ways and to always find the humanity just beneath the surface. Critical acclaim appears to be something that all of Monroe’s albums have in common. Like a Rose (2013), which included the sublime — and alternatingly bawdy and poignant — singles "Weed Instead of Roses," "You Got Me" and the title track. The Grammy nominated Blade (2015) followed with the soulful lead single "On to Something Good.” Sparrow (2018) turns Monroe’s life experiences into moody, orchestral masterpieces that explore all sides of a fully formed woman unashamed of her scars – the maternal tendencies, the childlike wonder and the sultry moments behind closed doors, as showcased on her single “Hands On You.” Recorded with Grammy winning producer Dave Cobb in the legendary RCA Studio A. All her albums received top country albums recognition by Billboard, Rolling Stone, The New York Times, Washington Post, American Songwriter, Esquire, Stereogum, Taste of Country, Amazon Music, All Music, Uproxx and Nashville Scene Critics Poll. Monroe has recorded with artists ranging from the Raconteurs and Train to Wanda Jackson, Vince Gill, Mat Kearney, Ricky Skaggs, Sheryl Crow, Miranda Lambert and Butch Walker. She received several GRAMMY nominations, one for her album The Blade, and also for her No.1 duet “Lonely Tonight” with Blake Shelton, in addition to CMA and ACM nods.