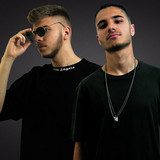 Anyone who has been able to listen VANTIZ behind the decks agrees that their sets are integrated into a perfect whole which results in a positive energy explosion and is transmitted to all the visitors at a moment. -At the end of 2018 duo got signed by one of the biggest record labels in the world Armada Music through their sublabel called Skink which was founded by famous Dutch duo Showtek! The track was world premiered by Don Diablo and has been a part of Dannic, Firebeatz & Fedde Le Grand's radioshows and it has been played at almost every Fedde Le Grand's set including sets from Tomorrowland, Untold, Dance Valley and clubs in Ibiza..! Last three years were definitely the ones to remember for Vantiz, beside that they have worked on some of the biggest festivals in the region such as Exit Festival, Energija Festival, Ruma Foam Fest and many more, they had a one month long tour in China, performing at some of the best and the biggest clubs in China.

-Beside their great DJ career, this duo is also active when it comes to music production.