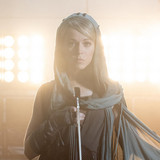 Lindsey Stirling remains fearless enough to always dream big. In the near decade since the release of her 2012 self-titled debut, the electronic violinist, dancer, and artist has quietly and humbly become one of the 21st century’s most innovative stars.

Her groundbreaking vision of cinematic violin-driven electronic music has gained her millions of adoring fans worldwide, four Billboard chart topping albums, a RIAA Gold certification for her sophomore opus Shatter Me , and two Billboard music awards. Having amassed over 12.5 million subscribers and 3 billion views on YouTube, Forbes placed her at #4 on its 2015 World’s Top-Earning YouTube Stars list, making her the highest-ranked female. The multi-hyphenate was also runner-up on the 25th season of ABC’s Dancing with the Stars. Stirling’s first holiday collection, Warmer In The Winter (Deluxe Edition), closed out 2017 as the best-selling holiday album of the year. In addition, her single “Carol of the Bells” is still the only instrumental song to ever reach the Top 10 at AC Radio.