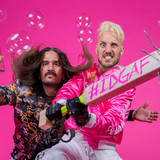 Multi-instrumentalist Jørgen Munkeby, front man of Norway’s genre-defying Shining, is not one for sitting still; his unstoppable creative energy is vivacious, restless and at the forefront of his existence. “I was born with my two middle fingers first” opens the new track; with its ultra-modern soundscape, juxtaposed by old Viking war imagery, “Slaughter” is the follow-up to Shining’s most recent single “IDGAF” and it is a fresh story about the joy of fighting. “If everything falls down to pieces here today, let the angel’s choir sing and burning bridges light my way”, sings Munkeby in the first pre-chorus. It’s a fitting line from a band that has made a 20+ years long career from risking it all, again and again. “IDGAF”

and "Slaughter" continues the musical direction the band surprised fans with on their most recent studio album Animal (2018). A controversial record amongst fans upon release, it has now surpassed anything that came before it, scooping up more than 8 million streams on Spotify alone. Self-produced & recorded by Munkeby, mastered by Chris Gehringer (Twenty One Pilots, Machine Gun Kelly, YUNGBLUD, Rihanna), “Slaughter”, sees Shining continue their relentless quest for new musical adventures, and, ultimately: WORLD ROCK DOMINATION.