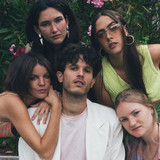 Born in Granada, Spain, and currently based in Berlin, Kid Simius circumvents genre limitations to embrace and merge a myriad styles. Delving into electronic music, ambient, surf-inspired electronica, Balearic, disco and lots more, this is an artist who puts good energy and human connection above genre labels. // Since relocating to the German capital he has created unorthodox rap beats as part of the Marsimoto crew, delivered remixes for Parcels or Beatsteaks, released many successful tracks as a solo artists on his label 'Jirafa Records‘ (remixed by Echonomist, Paul Kalkbrenner, Fort Romeau & Magit Cacoon) and co-wrote a platinum-certified chartbuster on the side, with Marteria‘s Lila Wolken. Also appearing on festival stages as diverse as Melt!, Fusion or SXSW, as well as supporting WhoMadeWho or Major Lazer. // Respected tastemakers the Adana Twins also signed his track ‚Ford Granada’ to their TAU label. More recently he released the Chicken Mango EP on Jirafa, guests on the EP include Gerd Janson and Spanish indie band Hinds. Besides his studio work and on-stage performances, Kid has a popular radio show on German station, Ego FM, called Acido Flamenco Rave Club) focuses on club culture. // On the radio, or in the studio, on the road or simply jamming and freestyling, Kid Simius makes music in the moment and for the moment. There’s no fakery or pretence, just pure, deep authentic love for music in its many beautiful forms.