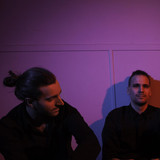 Astronaut in Cyberspace is an alienation rock band from Stockholm, Sweden, formed autumn 2014. The lineup is Diene Faye (vocals/guitar/synth), Adam Öhrsvik (guitar), Demba Lo (bass), Carl Resare (drums). The music is inspired by 90's alternative rock, like The Smashing Pumpkins, Radiohead and Primal Scream, together with pulsating soundscapes drawn from the universe and nature. Also known for heavy uses of samples, art, and visual effects, the live shows aim to take the audience on a journey through space and time - alienation rock. 2016 saw the release of the debut LP Aurora.exe, and new singles leading up to the sophomore album are to be released during 2017.