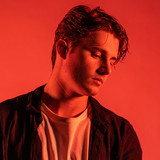 Joel Adams burst onto the pop scene in 2015, when his debut single went viral around the world. Currently at over 500 million streams on Spotify, “Please Don’t Go” is the song that kick-started a journey into the deeply earnest and perceptive songwriting that sees Joel emerging on the other side in 2021. Born and raised in Brisbane, Australia, Joel Adams began writing his own music at the age of 11. After moving to LA in 2016, Joel released tracks such as “Fake Friends” (a co-write with OneRepublic’s Ryan Tedder), “Coffee” and “Big World”, dealing with themes of social disillusionment, prolonged heartbreak, and a worldview in flux. After releasing his first official body of work in March 2020 (the Joel Adams EP), he returned to Brisbane as the COVID-19 pandemic took hold of the world. Since then, Joel has been taking time for reflection and reorientation in the place where it all started, planning his next release with some of Australia’s best producers and writers. Where Joel’s breakout debut found strength in vulnerability, his upcoming release, “Goodbye”, sees him double down in his sensitivity, unafraid to present himself unabashedly– a daring move in pop music today. In a musical landscape where idle thoughts are wrapped in high-powered production, Joel stands out, his production carefully shaped to make room for a raw and honest voice with something to say. His latest single :"Goodbye” will be out May 28 followed by shows in Australia throughout the year.