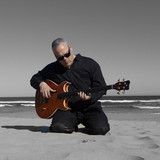 folmR is the musical project of Michael Folmer Hansen.  folmR's Roland SH-2 and MC-202 synths, Boss DR-55 drum machine and fretless Rickenbacker knock-off were stolen in 1984. The items were uninsured and folmR is still seeking revenge, making like Gauguin some thirty years later and dropping his suit for the life of an artist. He won't be leaving his partner and marrying a 14-year old Tahitian girl (or getting syphilis and becoming famous after his death), but he is having fun and exacting revenge by creating noise and other things.   Owner of the label and publisher Unit 7 Noise, co-producer of the Phillip Glass Buddha Machine and early supporter of Soundbrenner, The Chromatic Endpin and WORNG Electronics, folmR's interest in music goes beyond the desire to make it. folmR is a resident artist at Melbourne's Meat Market and a life member of MESS (Melbourne Electronic Sound Studio).   After more than thirty albums on his own and with collaborators. folmR's output is equal parts prolific and eclectic. He calls it Fretless Monophonic Post Krops Jazz– a kind of avant-garde-noisy-jazzy-sometimes-danceable music.