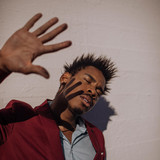 Once or twice a century a sound comes along that belies all comparison. There’s been Nina Simone, Howling Wolf and Amy Winehouse. But Desi Valentine is the first of his nature. He is a recording artist singer and songwriter with a modern mind and a timeless sound. To truly know Desi is to listen. Born and raised in Catford London. Desi is a UK native that is paving the way for his bluesy, soulful sound to blend with today’s modern pop world. Having sung backing vocals for such artists as Sir Elton John and Gloria Estefan and starred in West End and Broadway shows. In the words of Sir Elton John himself ‘Desi is a true artist in his own right’ Desi’s music has been featured on network television shows and global commercials. He’s recently sold out the iconic venue The Troubadour in West Hollywood. His debut album ‘Shades of Love’ is receiving great reviews the title song music video will debut on VEVO’s Alt RnB channel to 3 million subscribers.