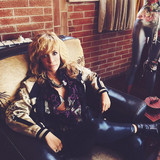 Italian poet, lyricist, and singer/songwriter Giulia Anania began a recording career shortly after releasing his first book of poetry in 2004. The prolific artist sometimes released multiple albums in a single year, all while continuing to work on poetry and soundtrack recordings and writing songs for other artists and for various theater productions. In February of 2012, a self-titled seven-song EP was released on Universal. The EP spent two weeks on the Italian album charts, peaking at number 49. ~ Fred Thomas, Rovi