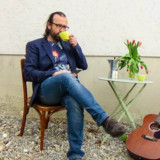 Stephan Greminger aka HisDogBingo is a Swiss musician (*1973 in the canton of Thurgau). He has lived and worked in Bern since 1997. Stephan Greminger made his debut with the HisDogBingo EP in 2010, which he produced himself on his own record label "Kekse Produktion". Stylistically, HisDogBingo started out in the genre of indie folk and Americana. However, a musical playfulness could already be discerned on the first album. Over the years, an eclectic style established itself. During the creation of the HisDogBingo albums, there were always fruitful collaborations with various musicians, especially from the Bernese scene. In 2012 the album "Big White Ghost" was produced together with the Bernese guitarist Oli Hartung as co-producer (Shoppers, Bubi Eifach, Veronika's Ndiigo,...). The recordings took place in the studio "La Fonderie" in Fribourg. Here they collaborated with Henk Hofstede, the singer of the Dutch band "The Nits", among others.

In 2018, "Grapefruit Tears", a special work by HisDogBingo, was released. For the vinyl production, there was a collaboration with the Bernese artist Flurina Hack. She painted over existing record covers and created 100 originals that could be purchased together with the music. The recordings for "Grapefruit Tears" took place in 2017 at ZOO Studio in Bern.