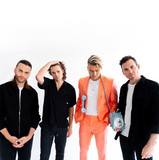 Having just supported Two Door Cinema Club at Glasgow's O2 Academy and completed a largely sold out run of debut headline shows around the UK, the impending rise of this British quartet feels somewhat inevitable.   “We could see the path in front of us” says DAYTIME TV’s frontman Will Irvine. “People were reacting well to our music and they were always coming back to gigs, the shows are getting bigger which is always a good sign.” A product of pressure and unwavering determination, DAYTIME TV are ready to step out with their spectacular stadium-ready sound.   Recording with GRAMMY®-nominated producer Romesh Dodangoda (Bring Me The Horizon, Twin Atlantic, Lower Than Atlantis) gave DAYTIME TV the opportunity to push the boundaries like they always wanted. “We’ve written what we feel are the best songs we’ve ever done, by a long way and we wanted somebody that was going to push us and bring the songs to life.” And that’s exactly what happened, their writing skills and musicianship were rocketed into new and exciting uncharted territory. Irvine continues “We spent five weeks living in Cardiff, in this mad world where recording was our sole purpose.” If the first few releases from this new band are anything to go by, we are all in for a treat.   DAYTIME TV: Will Irvine (guitar / vocals) Chris Clark (bass) Gareth Thompson (drums) John Caddick (guitar / keys).