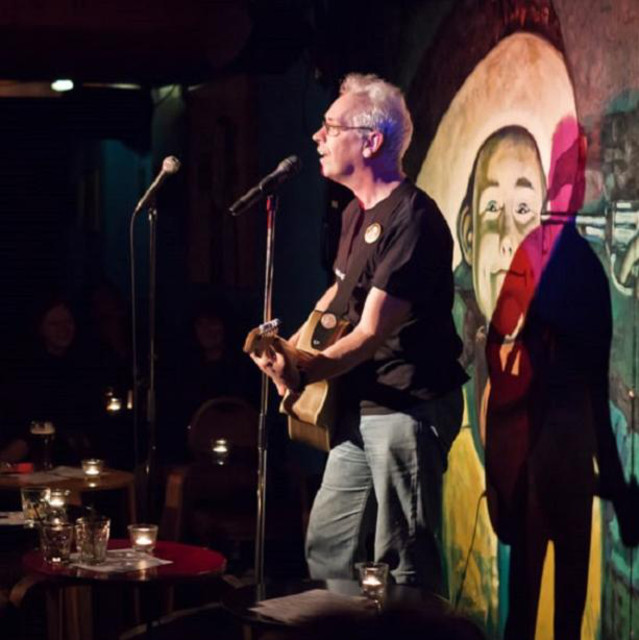 “The man who’s become a cult hero with his daily dose of musical satire” – Total Politics Tommy Mackay (“a national treasure” – James Millar, Political Yeti) played in punk bands in the 70s and 80s, but then resurrected his career to become a popular entertainer on the Scottish comedy circuit. Described as “The Scots Half Man Half Biscuit” (History of Scottish Music) and praised for his pop sensibility and witty lyrics, he won Fife Comedian Of The Year 2011. In 2012, he performed a one man musical at the Edinburgh Fringe, Oliver Pissed and wrote the soundtrack for the zombie comedy film, Wraith Rovers. He also contributed regularly to the Caledonian Mercury and the BBC Comedy Unit’s Rough Cuts. Collaborations include his work with Armando Iannucci and Greg Moodie. Tommy also produced the Throbbing Thistle albums which include contributions from Stewart Lee, Ted Chippington and many others. His other guises include stramash-up tart, The Plagiarist, The Fall tribute band, The Foul, They Might Be Gannets, Half Bam Half Whisky , Supertrump and Borrissey. In 2016, Tommy was No.1 in the BBC’s Week In Politics chart, with Ziggy Sturgeon and the Spiders From Katie Melua’s Ears. He has released many CDs, all available at the Daily Reckless shop and his YouTube channel has had over 2 million hits. The Daily Reckless - the paper that sings the news, is edited by Tommy and constantly updated with a song of the day and a free weekly newsletter for all the up to date info.