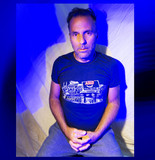 "...a strikingly original composer, leader, conceptualist."-DownBeat Magazine "David Binney possesses one of the most original minds in contemporary music."- Stereophile Acclaimed as a considerable and highly individual compositional talent, saxophonist, composer, producer David Binney is one of the most prolific musicians on the scene today. David has recorded 20+ albums as leader or co-leader and recorded on more than 300 other albums. David was born in Miami, Florida and raised in Southern California. At the age of 19 moved to New York City and lived there for many years. He now resides in Los Angeles. And Produces records and performs worldwide. He also mixes and masters records. Creator/Producer of the band that is David Bowie's Blackstar. Performed/Recorded w Chrissie Hynde, Knower (Louis Cole, Genevieve Artadi), the big bands of Gil Evans and Maria Schneider, as well as with Jim Hall, Uri Caine, Vinicius Cantuaria, Carlinhos Brown, Norah Jones, He has produced all of his own 22 albums,