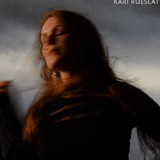 Kari Rueslåtten has one of the finest voices of alternative Nordic folk-pop, and a worldwide fan-base. She is known for her dark-edged melancholy uncovering the beauty hiding in the dark. She released her debut album Spindelsinn in 1997, and has released seven solo albums. Kari Rueslåtten’s voice has developed in the mix between natural talent, classical training and roots in the Norwegian folk music tradition. Kari Rueslåtten was one of the founder members of the progressive doom metal band The 3rd and the Mortal in the early 90s. The band defined a genre, and Kari Rueslåtten was one of the first role models for female singers fronting metal bands in the 1990s, and the main inspiration for many bands such as Nightwish and The Gathering. Webpage and webstore: www.karirueslatten.com