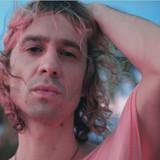 Hidden away from the public’s eyes and ears, sheltered in his studio behind a stash of analog synthesizers and equipment PRESSYES worked on turning his vision of summery and sparkly yet psychedelic pop tunes alive. Before going awol PRESSYES collected countless memories on his travels, backpacking through Asia and Europe. The need to process all these experiences – the bits and pieces of information and values taken from different cultures and places – led him to really take time away from the world, condensing these memories into what has become a special soundscape, carefully crafted and created with seasoned analog equipment. His new single "Atlantic Ocean Spray" takes you on a mental road trip to the beach you couldn’t visit last year. In the lost summer of 2020, when it seemed almost impossible to escape, Pressyes took Zeus (his 75´ VW camping bus) for a ride down to the coast. On the way he picked up two young French hitchhikers and ended up shooting a music video with them on his old SUPER 8 camera, making the video just as analog as the track itself. The easygoing chill-vibe of the song follows in the footsteps of psychedelic bands like Khruangbin and Unknown Mortal Orchestra. Recorded, played and mixed by Pressyes, ‘Atlantic Ocean Spray’ is as vibey as an ice-cold watermelon.