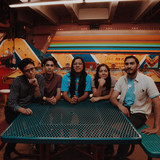 Nebulamigo is a dreamy, guitar-pop quintet hailing from Long Beach, CA. Their charming brand of indie groove draws heavily from the classic rhythms synonymous with 80’s R&B darlings Sade and Chaka Khan, as well as guitar and vocal stylings found throughout the world of alternative rock. Singer Alex Valles' gentle tenor, bolstered by the intricate, jazzy riffplay from guitarists Rain Gregorio and Vince Salas, glides above their spacious, dulcet tones, but it’s Nebulamigo’s rhythm section, thanks to the nimble handiwork of bassist Jesse Perez and drummer Lexi Vega, that blends the ethereal with the pocket effortlessly. The group formed in the summer of 2016 around a few songs written by Valles, and went on to record them with Jon Joseph in Pasadena, CA, in early 2017. Their debut EP Talk in Roses was released on June 9, 2017, followed by a steady run of shows in the Los Angeles and Orange County areas.