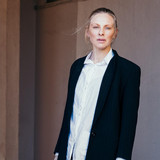 While considered a Norwegian jazz singer and songwriter, Torun Eriksen's voice transcends genres. A veteran recording artist, she is equally at home in folk, pop, and rhythm & blues settings, and often blends them seamlessly in her original compositions. She is also an adept interpretive singer whether she's performing pop standards or the vanguard classical compositions of others. Eriksen began singing at the age of six in a local gospel choir in Lunde. As an adolescent, she and her family moved to the more urban Skein, and she attended a music high school. She continued to sing in various choirs, and in her studies encountered jazz, classical, and contemporary music. She was also encouraged to write and sing her own songs. At 19, she became a featured soloist. Her influences include everyone from Aretha Franklin, Randy Crawford, and Stevie Wonder to Joni Mitchell, Pat Metheny, and Rickie Lee Jones. After moving to Oslo in 1997, she enrolled in the Norwegian Institute for Stage and Studio. By this time, she had already met bassist Kjetil Dalland. They formed a band playing Eriksen's songs. Her early compositions included "Glittercard"; Bugge Wesseltoft came across a demo version of the song, which she had recorded in Sweden, and subsequently signed her to his Jazzland Recordings label, where she has remained. Her debut album was titled for the aforementioned song, and released internationally in April 2004, earning numerous critical accolades. She toured the region, learning the art of live performance with a crack band that included not only Dalland but David Wallumrød and saxophonist/flutist Frøydis Grorud. Prayers and Observation was issued in 2006. In 2007 she toured Japan as a special guest with the Jazzchoir Freiburg, which featured orchestral arrangements of her songs. In 2010 she released the acoustic Passage, produced by drummer Anders Engen and including guitarist Kjetil Steensnæs. Though Eriksen wrote and recorded exclusively in English, she and Grorud released a Christmas recording in Norwegian, Sanger om Glede og Fred, including her translation of Mitchell's "River."

The endless touring and club work over the years resulted in a break for Eriksen, though she contributed to albums by Synne Sande and Grorud. She re-emerged in 2013 with Visits, a collection of covers produced by Tobias Frøberg (Ane Brun). The set ranged across the pop spectrum and included songs by Prince, Pink Floyd, Randy Newman, D'Angelo, Jimmy Webb, and Tom Waits. The record not only garnered attention but gave her the creative impetus needed to begin writing again. In 2015, she guested on Wesseltoft's Bugge & Friends and toured with German jazz guitarist Susan Weinert, and also joined Weinert on the album Fjord. Eriksen and bassist Dalland co-produced 2016's wildly diverse Grand White Silk, which featured all original material. On Grand White Silk, she and Dalland were joined by Wallumrod on keyboards, new drummer Andreas Bye, and electric guitarist André Berg. The same year she and pianist Julia Hülsmann toured Europe, performing both songs and poetry. ~ Thom Jurek, Rovi