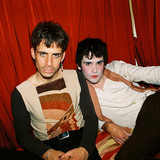 Family Time were thrown into the limelight by virtue of their infamous hotel tour, in which they played their self-recorded conceptual pop opera to the unsuspecting residents of Spain’s vast hotel scene. Their awaited debut, The Great Abismo, was released in 2019. Trading the humid backdrop of holiday resorts that illuminated their last work for a snow-stormed makeshift studio-shelter in Berlin, they have been working on new material of a certain fin-de-siècle allure, of which we are now offered an opening taste.