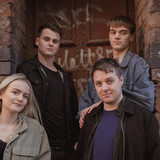 Sahara Line is a four-piece Alt-Rock band formed in Liverpool, UK, with powerful vocals, heavy riffs and soaring solos making their own type of

stadium-ready anthems. After great success with gigging for almost 3 years, packing out the cavern club in Liverpool, releasing the songs is the next step. Their debut single "Exile" competing with fellow rock anthems giving a thrilling, almost horror inspired take on the guitar based music. With the upcoming songs such as "Plead", a heavy riff based tune and "Only You" a more rock ballad piece, on the horizon, Sahara Line are a band to stick around for. Proudly sporting confident and thought provoking music videos and immense live shows, Sahara Line pride themselves on not just creating music people enjoy but an experience they remember. The band consists of front-man Jacob Samuel, Pink Floyd inspired virtuoso guitarist Nye Goodall, Powerhouse bassist Meelie Traill and drumming perfectionist Sam Mainard. Sahara Line will not disappoint, recorded or live. You may be hearing about them sooner than you think.