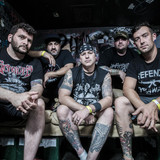 Featuring All Out War

Since the early 1990s, New York's All Out War have been a hardcore crossover outfit that embrace thrash metal as an extension of their punishing root sound, which integrates influences ranging from Slayer and Agnostic Front to the Cro-Mags and Sick of It All. This integrative attack was uncommon at the time, and generated some controversy among purists, but albums such as 1997's Truth in the Age of Lies and 1998's For Those Who Were Crucified are foundational entries in the thrashcore canon. Despite their twin focus, they have remained an important part of the U.S. hardcore scene and frequently play the genre's festivals on both sides of the Atlantic. Their brutal mix has gained the band a loyal following among metal fans as well as expanding their fan base exponentially since 2013. While 2003's Condemned to Suffer was a high-water mark before their split in 2010, their reunion and tour in 2013 offered proof of a reinvigorated sound, while 2017's Give Us Extinction full-length, on Organized Crime Records, delivered proof of fresh creativity while upping the production ante.

Upon their formation in the early '90s, All Out War recorded some demos and the 7" Destined to Burn, and played out at shows locally around Newburgh and down in N.Y.C. The original quintet Eric Carrillo (bass), Brad Mader (guitar), Taras Apuzzo (guitar), Matt Byrne (drums), and Mike Score (vocals) released their first album, Truth in the Age of Lies, on the German label Gain Ground in 1997 and embarked on their initial tour. The band lineup changed, although Score remained at the front and Carillo on bass. They shared stages with Deicide, Agnostic Front, Napalm Death, and Earth Crisis, among others. Chicago-based Victory Records released the followup long-player, For Those Who Were Crucified, in 1998 prompting (false) rumors that All Out War was a Christian band. Tours with Buried Alive, Reach the Sky, and Shadows Fall followed, and after an appearance at the New England Metal Fest in 2001, All Out War broke up for the first time. They resurfaced two years later for a benefit show at CBGB, which ultimately led to the album Condemned to Suffer for Victory Records. Score and Apuzzo were completed by bassist Andy Pietrolungo, drummer Jesse Sutherland, and guitarist Jose Segarca. That lineup only lasted long enough for a two-week European tour and a bout of American dates with Misery Signals before things went sour once more; everyone but Score left to form Nerve Gas Tragedy. Score eventually welcomed former members Antonelli (guitar) and Carrillo (bass) back, and longtime friends Jim Bremer (guitar) and Lou Iuzzini (drums) joined the fold. This grouping recorded April 2007's Assassins in the House of God that for some reason furthered the falsehood that they were a Christian metalcore outfit. After the ensuing tour, Iuzzini left and was replaced by Lou Medina on drums for 2010's Into the Killing Fields. Following European and American tours and festivals, All Out War split again and remained silent until re-forming to tour and release a double A-side 7" "Drowning in "Damnation"/"Show of Force." Two years later, the band surfaced again with more lineup changes -- Jesse Sutherland was on drums and a returning Taras Apuzzo and new member Andy Pietroluongo on guitars -- to issue the Dying Gods EP, All Out War's debut for Organized Crime. This incarnation played the band's most successful tour of the U.S. and issued the "Accept No Masters" single in 2017. Two years later, the group reconvened in a New York studio and emerged with their Unbeaten Records debut, Crawl Among the Filth, produced by John Naclerio. ~ Mike DaRonco, Rovi