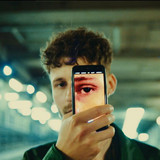 Ant Antic is the singer, multi-instrumentalist and producer Tobias Koett. Growing up in small-town Austria, Tobias got into music stealing Beatles records from his older brother, trying to learn and sing their songs. Having had the possibility to learn several instruments, he started producing music on his first computer when he was 14, soon releasing songs on MySpace and getting his first radio airplay at the age of 16. During several depressing years trying to fit in at a mechanical engineering school, he found joy in playing music in an indie rock band and organizing festivals for film and music. The self-doubt induced by a constant feeling of not fitting in laid down the foundation of his songwriting in these years. Having finished school, Tobias moved to Vienna, where he got to work on a project with drummer and producer Marco Kleebauer. Pushing each other to become better producers and songwriters led to a deep friendship – and the foundation of Ant Antic in 2015. After the release of the debut album Wealth and two years of touring and recording, Tobias decided to move to Berlin to pursue opportunities and work as a music producer. While Marco is no longer playing live with Ant Antic, he’s still working on songs with Tobias in the studio, and the two remain good friends despite the distance.