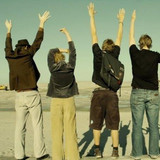 Ampel was a Danish twee pop ensemble founded in Copenhagen in 1999 by Kasper Clemmensen (songwriting/vocals/guitar), Morten Hougaard (bass) and Mikkel Felland (percussion/keyboard/vocals/various) after a pubcrawl following a concert with Tocotronic. They initially called the band 'Traurig und langweilig' which is German for 'Sad and boring'). In 2003 Ampel added Ditte Duus as a violinist/percussionist/vocalist to their lineup, and in 2004 they released the EP Drink Your Milk. The often percussion-less, acoustic sound evolved from the rare use of only a snare drum and brushes on this EP to later include a stand-up "cocktail" drum kit. In 2005 the lineup was further perfected with the addition of Peter Laursen (guitar/accordion/recorder/ukulele/melodica), and the band self-released two mini-EPs, 2005's Roger Human Toad and 2006's Powdered Milk. The band was mainly active on the Copenhagen DIY scene in the late 00's, and was known as a lively act, because of their many stage changes, instrument switches and happy-go-lucky feel to their lyrics and general sound. In the summer of 2013 the band went on a hiatus, which turned into a de facto split-up. To "celebrate" their 5-year break up anniversary in 2018, Ampel released a 21-track album of songs they had never properly recorded, and thus never released in their active years. The album was named "Traurig und Langweilig". Ditte, Kasper and Morten are currently performing as @Tampopo