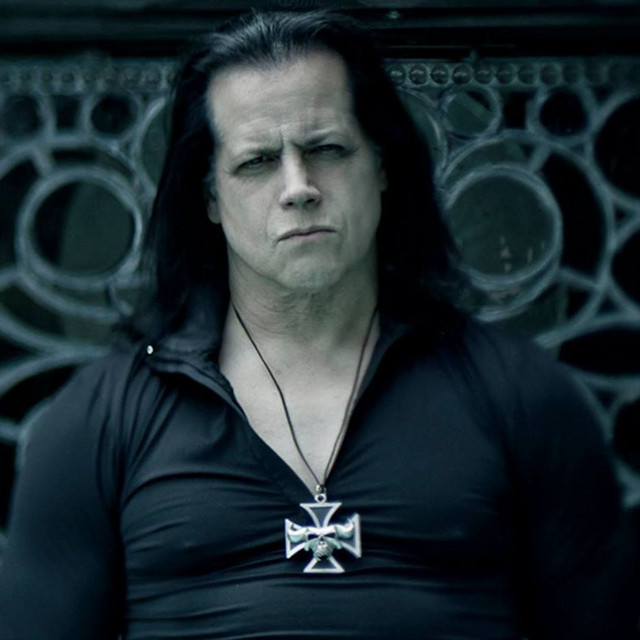 After becoming a cult hero as the lead singer of the Misfits and Samhain, Glenn Danzig finally stepped into the mainstream with his group Danzig, who took the horror-themed lyrical imagery of his earlier groups into darker and more devilish directions while draping his rough but melodic tunes in heavy metal garb. Featuring former Samhain members John Christ (guitar) and Eerie Von (bass) along with powerhouse hardcore drummer Chuck Biscuits (formerly of Black Flag, D.O.A., and the Circle Jerks), Danzig was an ideal vehicle for the frontman's booming, theatrical vocal style (Elvis Presley, Roy Orbison, and Jim Morrison were often cited as his key influences) and the gothic melodrama of his songwriting. Danzig's first two albums -- 1988's Danzig and 1990's Danzig II: Lucifuge -- set the template for his new sound as he gained greater visibility, and for many, 1992's Danzig III: How the Gods Kill would remain his definitive work. The 1993 EP Thrall: Demonsweatlive combined studio and live material, earning Danzig a major MTV hit with a live version of "Mother," but 1994's Danzig 4 was the final album featuring the original lineup. 1996's Danzig 5: Blackacidevil found the frontman exploring industrial-influenced sounds and taking a larger role as an instrumentalist. Through the rest of the '90s and up to 2010, the Danzig lineup was a revolving door and their releases reflected a lack of stability, but with 2010's Deth Red Sabaoth they took a more aggressive and more focused attack suggesting the Misfits and Samhain. Glenn paid homage to a number of his key influences on 2015's Skeletons and 2020's Danzig Sings Elvis. Glenn Danzig co-founded the Misfits in Lodi, New Jersey in 1977. They rose from obscurity to become one of the biggest bands in the hardcore underground before they broke up in 1984. Almost immediately after the Misfits called it quits, Danzig formed the metallic, brooding Samhain in order to experiment with different sounds, but that project imploded as well. The band Danzig was put together in 1987, and quickly inked a deal with Rick Rubin's Def American label. Their self-titled debut found Danzig playing the Satanic metal singer role to the hilt, even if the band's songs sounded much the same. Danzig II: Lucifuge followed in 1990, and it broadened the band's musical palette, expanding on the simple blues riffs of the debut with more extensive forays into that style. Danzig III: How the Gods Kill marked a full-fledged entry into the realm of gothic romanticism, working to create moods rather than pounding heavy metal aggression. "Dirty Black Summer" and "How the Gods Kill" became staples on MTV's Headbanger's Ball. Danzig next released a solo project, Black Aria, a quasi-operatic attempt at classical instrumentals depicting the fall of Satan from heaven. The band broke through into the mainstream in 1993, when a live video for "Mother," a song originally released on Danzig that appeared in a live version on the EP Thrall: Demonsweatlive, became an inescapable smash on MTV and even charted as a single, nearly cracking the Billboard Top 40. Meanwhile, Danzig contributed a song entitled "Thirteen" to Johnny Cash's acclaimed 1994 effort American Recordings. The more experimental Danzig 4 was released in 1994 and entered the charts at number 29, but its quiet, moody, atmospheric subtlety didn't find as much favor with the band's new audience as the anthemic "Mother," while some longtime fans dismissed it as too mellow, and therefore commercial. During the supporting tour, Chuck Biscuits left the band and was replaced by Joey Castillo. Following the tour, Danzig broke up the band and formed a new version featuring ex-Prong guitarist/vocalist Tommy Victor, drummer Castillo, and bassist Josh Lazie; this lineup released Danzig 5: Blackacidevil on Halloween 1996. Blackacidevil was ignored by both the press and the public, falling out of the charts after a mere three weeks. 6:66 Satan's Child followed in 1999; Live on the Black Hand Side appeared two years later. In 2002 and 2004, respectively, Danzig released the stripped-down I Luciferi and Circle of Snakes, both returns to form that found the artist emulating the simplistic brutality of his 1988 debut. Black Aria II arrived in the fall of 2006. The band did a tour in 2008 to celebrate the 20th anniversary of their debut before releasing their ninth album, Deth Red Sabaoth, in 2010. By this time Danzig has finally found a steady lineup, with Glenn joined by Tommy Victor on guitar, Steve Zing on bass, and Johnny Kelly on drums, though Glenn continued to contribute guitar, bass, and keyboards to their studio sessions. Skeletons, a ten-track collection of newly recorded covers that included Danzig-blasted renditions of Aerosmith's "Lord of the Thighs," the Everly Brothers' "Crying in the Rain," and Davie Allan & the Arrows' theme from the 1967 biker film "Devils Angels," arrived in 2015. 2016 saw Danzig setting aside years of legal and personal squabbles with Misfits bassist Jerry Only -- who had been leading his own edition of the band since 1996 -- to play a pair of shows headlining that year's Riot Fest festivals in Denver and Chicago under the banner the Original Misfits, joined by guitarist Doyle Wolfgang von Frankenstein, second guitarist Acey Slade, and former Slayer drummer Dave Lombardo. The success of the Riot Fest dates led to a number of other Original Misfits shows (including a sold-out appearance at Madison Square Garden), while Glenn kept Danzig active, releasing the album Black Laden Crown in 2017. Long a serious Elvis fan, Glenn began recording covers of songs from the Presley catalog at his sessions, initially with an eye toward putting out a tribute EP. In time, the collection of Elvis tracks grew into a full-length album, and Danzig Sings Elvis was released in April 2020. ~ Steve Huey & Mark Deming, Rovi