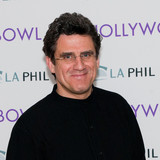 Belgian-born Dirk Brossé is a composer and conductor whose dual careers veered into many directions, including composing oratorios, musicals, and film scores, and conducting both symphonies and whole concerts devoted to film music. Not surprisingly, his compositional style is quite eclectic, from the exotic orchestral work The Birth of Music -- An Ethno Classical Symphony (1997) to his fairytale musical The Prince of Africa (2002). He has written over 200 works in varied genres, including more than 20 film scores, among them Koko Flanel (1989), Daens (1992), and When The Light Comes (1998). Brossé has also led orchestras on film soundtracks, as with Elliot Goldenthal's score for The Good Thief (2002), which starred Nick Nolte. In addition, he has famously conducted many concert presentations of the John Williams music from the Star Wars series. Brossé has conducted major orchestras throughout Europe, the U.K., and U.S., and has made numerous recordings as a conductor. Many of his compositions are available on the EMI label. Dirk Brossé was born in Heusden, Belgium, on February 18, 1960. He earned a degree in music at the Royal Conservatory of Music in Brussels. He later took up studies with Volker Wangenheim at the Cologne Musikhochschule, earning a diploma in conducting. He took further conducting courses at the Vienna Musikhochschule. In the 1980s Brossé served as music director of two youth orchestras, the National Youth Orchestra of Belgium (until 1989) and the Brussels International Youth Orchestra (until 1990). Meanwhile, he was turning out such scores as the 1986 orchestral work On Safari, the choral piece Sanctus (1989), and the score for the 1992 Academy Award nominee, Daens. Throughout the 1990s Brossé remained busy as a composer and conductor, in the latter capacity leading mostly second-tier ensembles. His 1995 First Symphony, "Artesia," was a great success and was eventually issued on a Philips CD. From 1999, Brossé has served as musical host at the Ghent-based International Flanders Film Festival.

From 2001, Brossé began conducting many of the world's leading orchestras, including the London Symphony, Royal Philharmonic, and Rotterdam Philharmonic. Brossé continued to have success as a composer, as well, as evidenced by his 2007 song cycle The American Dream, on texts by Martin Luther King and Angelina Weld Grimké. From 2009, Brossé has regularly led highly successful and highly publicized concerts that feature music from the Star Wars films. At these concerts, excerpts from the six films are shown and live narrators are used. Busy though he is as a composer and conductor, Brossé also serves as professor of composition and conducting at the Royal Conservatory of Music in Ghent.