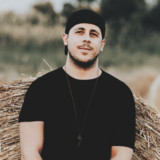 Canadian singer-songwriter, multi-instrumentalist and producer KAIS (Kais Khoury) takes the complexities of the human condition as inspiration for his fusionist sound that sonically melds indie, psych, soul-infused blues, rock and folk. At the outset of his music career, he addressed global topics before turning his attention to the drab difficulties and profound beauty of being human and lyrically dipped into meta poetry. ​ As a lover of the metaphysical, KAIS’ work consists of finding the balance between natural inclinations and the demands in an ego-driven late-stage capitalist world, and his wanderlust tendencies have seen him gracing global stages since the early 2000s as an independent touring artist. Since honing his craft in the early 2010s, he has received an honorary mention in the 2016 International Songwriting Competition, a Canadian Best Out of Province nomination at the 13th Annual Toronto Independent Music Awards and a Lyrics Finalist position in the 2017 USA Songwriting Competition. ​ In 2020, KAIS joined the London Indie sync licensing roster, North Note, and in 2021 he was interviewed by BBC Radio London host Robert Elms for his seminal 2018 single, Take Me Home. ​ Currently, KAIS works from his personal and commercial recording studio, Hot Soap Studios, in Cyprus, where he continues to work on his profoundly explorative music that challenges society’s constricting constructs that inhibit actualisation. web: www.KAISofficial.com