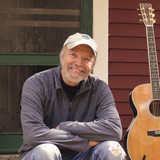 TomSmithMusic.com Tom Smith’s songs are in turns humorous, touching, thought provoking, and inspiring. Deeply rooted in the old-school folk tradition, his timeless stories are told with a voice that is honest and sincere with melodies that you will remember forever. In the words of noted WUMB-FM Boston radio DJ, Dave Palmeter – “Contrary to what a lot of people think, folk music is still a living tradition. It’s a living tradition that feeds on new songs that speak of people’s wants, people’s needs, people’s struggles and people’s triumphs. Tom Smith is more out of the tradition of say Pete Seeger and Tom Paxton than Jackson Browne or Connor Oberst. He’s a man who writes songs that seem like they’ve always been there. There are very few songwriters working today that I would call folksingers, but I would call Tom Smith a true folksinger.” Barbara Kessler writes, “Tom Smith will make you laugh and cry (maybe even in the same song) – a very captivating songwriter and performer.” Tom grew up in rural Pennsylvania in a family where music was part of the fabric of everyday life. As a young man living at the epicenter of the folk-quake that was Cambridge, MA in the 1960’s, Tom solidified what has become a life-long love of self-made music. Now a folk veteran of over forty years, Tom performs at festivals, coffeehouses, schools, and concerts throughout the Northeastern United States to audiences large and small, young and old.