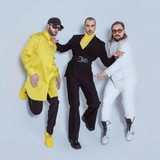 THE ROOP: DIFFERENT KIND OF MAINSTREAM WHICH IS ON FIRE! Music with a message, delivered with style and skill. • Musical style: dance-rock / pop • THE ROOP was formed in Vilnius, Lithuania in 2014 by singer Vaidotas Valiukevičius, drummer Robertas Baranauskas, and guitarist Mantas Banišauskas. • THE ROOP band name comes from an archaic English word "to roop" meaning "to cry out", "to shout out", "make a great noise". THE ROOP works touch on social topics by invoking music, images and other mediums. • The band became widely known after participating in the Lithuanian Eurovision National Selection in 2018 with the song “Yes, I Do”. The esthetic, stylish and emotional performance helped them to the 3rd place in the competition. • In 2020 Lithuanian choice for the Eurovision Song Contest – “On Fire” – gained many fans worldwide. The videos of “On Fire” have over 30 million views and counting. Even though the band couldn’t participate in the main Eurovision event because of the pandemic, they won most of the alternative online Eurovision song contests and took 1st place in the alternative German Eurovision TV live show. • Following success of ESC2020, THE ROOP won 4 M.A.M.A. Awards 2020 (LT) for Best Song, Breakthrough of the Year, Best Pop Act, and Best Band. • THE ROOP represented Lithuania in Eurovision Song Contest 2021 in Rotterdam. "Discoteque" was one of the public favorites and finished #8 in the Grand Final.