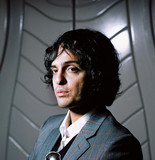 Eothen Alapatt, aka Egon, is the founder of Now-Again Records, the reissue imprint he founded in 2002. He oversees the label’s reissues and manages a vast catalog of music from the ‘50s through the present day, with a focus on the mid-‘60s to the mid-‘80s. He is the creative director of the JDilla Estate and is partners with Madlib in Madlib Invazion, a production company and label known for issuing the Freddie Gibbs album ‘Piñata’ and the Madlib Medicine Show series.   He was Stones Throw Records’ general manager from 2000 until 2011, during which time he oversaw the label’s transformation from a boutique hip-hop imprint into a globally-renowned bastion of good music. He produced, A&Red or managed the majority of Stones Throw’s albums - including Madlib and MF DOOM’s ‘Madvillainy,’ JDilla’s ‘Donuts’ and Aloe Blacc’s ‘Good Things.’   The success of Egon’s first Stones Throw anthology, 2001’s ‘The Funky 16 Corners,’ inspired him to found Now-Again, with an original mission statement to focus on similar reissues of regional American funk and soul. In recent years, Egon has taken Now-Again on a journey across the world, tracking down forgotten artists, brokering licenses, researching and issuing anthologies from the ‘60s and ‘70s musical scenes of countries like India, Indonesia, Iran, Zambia, Nigeria, Zimbabwe and Ethiopia.   Egon is an obsessive record collector, and the playlist he updates regularly here is indicative of the musical journey he’s taken over the past 30 years.