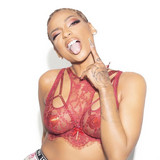 LeA Robinson is an American singer/songwriter, recording engineer, actress and humanitarian. Affectionately known as the ‘Granddaughter of hip-hop’ and no stranger to the music industry, LeA is the granddaughter of musical legend and hip-hop pioneer, Sylvia Robinson, founder of Sugar Hill Records. LeA has progressively been making strides to continue her family legacy as well as create her own with her melodic sonics composed to hit notes that resonate with the soul. Born and raised in New Jersey, LeA’s first performances ever were in her grandmother’s kitchen alongside legendary neighbor, Ronald Isley. Surrounded by legends from an early age LeA was exposed to and soaked in so much knowledge, herself. LeA’s love for giving back, has been attached to every part of her life. As early as seven years old LeA partnered with award winning non-profit organization, Comedy Cures where she served as a volunteer performer, singer and became a motivational speaker for the ill and underserved around the globe. Today LeA continues her works with the Comedy Cures Organization. and has added work with Lend a Hand Organization traveling to the Bahamas to give insight to children interested in music. LeA is included in the small percentile of women who create sounds, music and media where women only make up 5%. LeA Robinson continues to showcase her talents and humility to the world expecting to forge her own legacy.