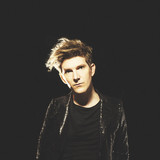 It was all one glorious accident. The indie pop project known as Bad Veins began as something of a low key solo project for garage rock vet and multi-instrumentalist Benjamin Davis—an outlet for him to document his kitchen sink-symphonic, theatrical-pop compositions in the privacy of his bedroom studio. But when his musician friends came knocking in need of an opening band, he found himself onstage with a 1973 reel-to-reel recorder. Bad Veins is Benjamin Davis and live member, “Irene,” a 1973 Pioneer reel-to-reel recorder that handles the duo’s lush soundscapes onstage. The project is best described as an opulent hodgepodge of sounds and aesthetics, including warm analog ambience, busted electronic textures, symphonic and choral bits, and stately arrangements and compositional conventions that recall indie Charlie And The Chocolate Factory as much as they recall the blissed-out orchestral indie-pop stylings of producer Dave Fridmann’s iconic work with Mercury Rev and the Flaming Lips. Bad Veins has toured extensively with Two Door Cinema Club, Walk the Moon, Frightened Rabbit, St. Lucia and We Were Promised Jetpacks, to name a few. Onstage the band is cathartic, visceral, and vulnerable, stretching songs into sweaty testifying-at-church-on-Sunday rave-ups with the crowd egging them on. Not only is the show a chance to bring the music to life, it’s a chance for a community, the Bad Veins Army, of equals to convene.