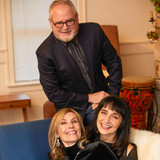 Renowned for the aural beauty and metaphysical power of its songs, October Project features award winning composer Emil Adler, internationally acclaimed poet/lyricist Julie Flanders and transcendent lead vocalist Marina Belica. Innovators in the ever-changing music world, Belica, Flanders & Adler have released a succession of highly acclaimed independent recordings following two albums for Epic Records (Sony) that helped define the musical landscape of the 1990s. A new, highly anticipated full-length album, “The Ghost of Childhood,” is due out in the near future. Powered by Flanders’ words, Adler’s music, and the group’s trademark harmonies, October Project has enjoyed sustained popularity and longevity around the world through the timeless impact of its material and powerful artistry of its vocals. They have sold over half a million records, with headline tours throughout the country and songs featured widely on television, radio and in film. Their most recent work, “The Book of Rounds: 21 Songs of Grace” (Sounds True, 2015), is a song cycle of 21 original musical rounds, each a fugue of positive messages or modern mantras intended to transform and uplift singers and audiences alike. A new choral recording featuring Chorus Austin, who performed the world premiere, will be released soon. SATB vocal arrangements and single line rounds are published by Hal Leonard and October Project. www.octoberprojectmusic.com