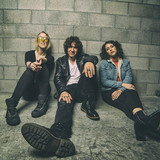 GOODING is soul-stirring, animated Rock ‘n’ Roll from the plains. With over 2,000 shows in 200 cities under their belt, this Nashville based three piece is by far one of the hardest-working bands in America. The band – which includes Gooding (Guitarist/Singer/band namesake), Erin O’Neill (guitar/bass/vocals), and Kelsey Cook (drums) – blasts a majestic, soul-stirring indie rock with soaring harmonies and blazing guitars – infused with the ghosts of Blues and Americana.

Their live shows have the confident energy and heart-on-your-sleeve emotion that echo the closeness and passion of these longtime friends. Playing to passionate audiences, lead guitarist/singer GOODING tears up the stage, leaving sticks and strings all over. Their relentless touring and honest interaction with their fans has enabled them to build their following brick-by-brick over the years without the support of a major label. GOODING has been featured in over 500 film and television placements, and helped form Funding The Future, a 501(c)(3) non-profit where they and other artists perform for and teach financial literacy to high school students in an effort combat income inequality.