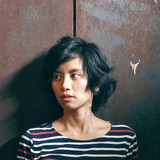 Reonda grew up in Brooklyn, New York listening to pop music, but later discovered great names such as Nick Drake, Elliot Smith, Vashti Bunyan, and Johnny Cash. After sneaking a classical guitar out from school, she taught herself how to play and began writing simple tunes. She managed to record and self-produced a couple of songs that will later become her latest album "Moon" . In 2016 she released her debut album, the introspective yet uplifting Lightness of Being.   Although a multi-instrumentalist in her bedroom studio, Reonda delivers warm and delicate layers of sound during her solo live performances with just a guitar and a set of effects.   When she's not making music, she enjoys doing design related work and running her indie brand - bowoonyc.com - SXSW 2017 - Strawberry Festival 2017 - Clockenflap 2016