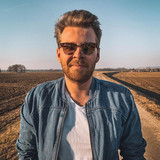 Michael Winkler (aka "OTRAY") is an Austrian DJ & Producer, currently ranked #43 on the "Austrian DJ Top 50" polls from the year 2019.   OTRAY started out in early 2017 as a solo project with his first release on Lowded Recordings (released under Reece Low's imprint) entitled "Ma House", which suddenly gained the attention of several from the most important mainstages set times in the world.

The "OTRAY" catalogue sums up to over 3.000.000 streams on all streaming platforms, and this might only be the beginning of something much bigger.