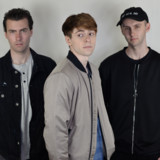 The Christopher Brothers is an alternative pop/rock band from Los Angeles, CA. The band has an international following with over 4 million views on YouTube, 440,000 Facebook “Likes”, and 70,000 Twitter Followers. Their album, “Dog Daze” featuring the single “Let Me Out”, debuted at No.7 on Billboards Hot Single Sales Chart and ultimately made it to No. 68 on the Top 40 Radio Media Base Chart. In addition The Christopher Brothers’ music, “And Now I’m In Love Again” from their EP “Smile”, has played at retail venues throughout the US. The band made it to the top 20 of the group category on X Factor with great praises from Simon Cowell on their original song "Smile." Their music video “The Girl Next Door” also won the “California Music Video Best Band Award“. Since the brothers formed their band, they have toured extensively throughout the United States performing at venues including the world famous Whisky a Go Go, The Roxy, LEGOLAND California, Six Flags, and the Time Warner Center in NYC. The brothers have opened for The Plain White T’s and Drake Bell on the High School Nation Tour doing hundreds of shows with Hollister and Ernie Ball as Sponsors. The Christopher Brothers also regularly perform at Downtown Disney.