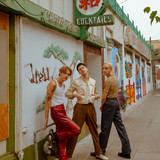 The San Francisco trio of Adam Abildgaard, Nick Duffy, and Ted Davis have built a loyal following and constant buzz over the last several years, with the 2019 Mood Ring standing as their most kaleidoscopic work to date. Merging the quintessential melodies of pop's past with contemporary touches to forge something truly unique, Hot Flash Heat Wave is just starting to create their own sonic world. 2019's EP launched the group into a realm entirely different from their previous catalogue. It is their truest-to-heart release yet, synthesizing a wide range of influences encompassing My Bloody Valentine, Frank Ocean, New Order, and Toro y Moi into something that sounds refreshing and rare. Mood Ring's lead single Glo Ride bounces with a slight R&B tilt against a dark, trippy atmosphere, while Sky So Blue finds the band spiralling into full-on psychedelia, complete with layers of spell-casting keyboards and a wonderfully zonked-out breakdown. And the future only seems brighter from here: with September 2020's Grudge single and music video and new single 'm o t i o n s' teasing new music to come in 2021, Hot Flash Heat Wave is preparing for the next step up the staircase in their colorful sonic journey, with determination to elevate their craft in the process. - Larry Fitzpatrick